Deep fried bananas is one if my favourite thai snacks. Naturally, when I realised it was one of the options at the cooking class, I became very excited. Even though the other guy wanted to do mango with sticky rice (which is also delicious), unlike the curry situation, I was unwilling to budge on my choice of dessert. In the end, I ended up watching on as he made mango with sticky rice while he got to look over my shoulder as I learned about deep fried bananas. 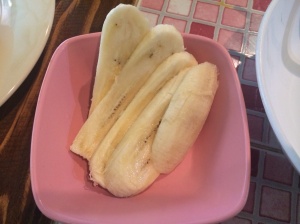 First, slice the bananas length-wise. If you’re using the long variety of banana popular in North America, cut each length in half once.

In the cooking class I took, we mixed this ready-made flour with some coconut milk and sesame seeds to make a batter to dip the bananas in. If you can’t find this type of flour, I’m sure it would probably be fin to mix some normal flour with baking powder and some sugar as a substitute for the pre-packaged stuff.

This may not be the most helpful description, but the batter was somewhere between runny and not runny. It had a consistency similar to pancake batter, but with fewer lumps.

Once you’ve dipped your bananas in the batter, you’re ready to fry them in some hot oil. Be careful as you place each banana slice in the oil, as it may splash back up at you, and you don’t want that.

Fry the bananas until they are golden brown on all sides. Remove from oil, and allow to drain and cool before consuming.

If you are planning a trip to Chiang Mai and you want to take a cooking class, you can find Madam a Thai near Thapae gate at 2/5 Tapae soi 6 Road or on Facebook at madamthaicookeryschool.

In the cooking class that I took, we made massaman curry, which is a popular curry, but it’s not my favourite. I went along with that choice because that’s what the other guest who took the class at the same time as I did had chosen. Really, I much prefer green curry. It’s actually pretty simple to make green curry paste. You need most of the same ingredients as for massaman curry (lemongrass, galangal, shallot, garlic, kaffir lime skin, finger root, and turmeric). Add to this a handful of sweet basil and about 10 small green chilies. Crush in mortar and pestle to form a paste and voila! you’re ready to make curry. 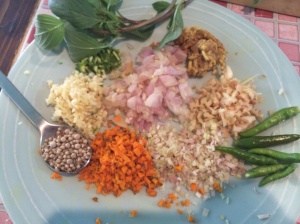 Start with some cubes of potatoes and carrots and some chicken. For the curry paste, you will also need some lemongrass, kaffir lime peel, mystery ingredient (sorry, I can’t remember what it’s called), turmeric, garlic, shallots, galangal, and big red chilies which have been soaked overnight in water.

This is the mystery ingredient. Anyone recognise this? 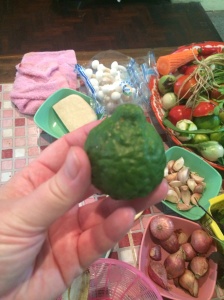 Kaffir lime (use only the peel for this recipe)

Start by crushing the dry herbs together in a mortar and pestle.

Pound in the wet ingredients until a paste forms. 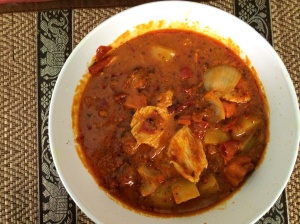 To prepare this beauty, heat some oil in a pan and add massaman curry paste. Add chicken, 1/2 cup coconut milk, cubed potatoes and carrots, and some chopped onion and bring all to a boil (until chicken is cooked through). I’m sure we did not add fish sauce and palm sugar in the class we did, but the recipe that Madam Thai provided says to stir in 2 tsp fish sauce and 1 tsp palm sugar and mix well. Then serve and enjoy.

If you are planning a trip to Chiang Mai and would like to take a cooing class, you can find Madam Thai near Thapae Gate at 2/5 Tapae soi 6 Road or in Facebook at madamthaicookeryschool.

Mince the garlic and slice the onion and chilies.

Heat some oil in a pan and add the garlic and chilies. When the garlic is fragrant, add the chicken and onion. Cook until the chicken us cooked through. Add the soy sauce, sugar, and oyster sauce. Finally, add the hot basil and serve.

If you’re planning a trip to Chiang Mai and would like to take a cooking class, you can find Madam Thai at 2/5 Tapae soi 6 Road, or you can find her on Facebook at madamthaicookeryschool.

When I was in Chiang Mai, I stopped in to Madam Thai’s cooking school and took a cooking class on a whim. The first course was spring rolls. 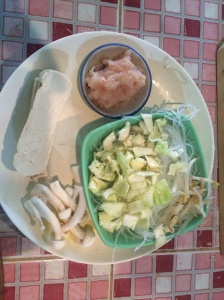 Pour a few glugs of oil in a pan. Brown the oil a bit before adding all the rest of the ingredients. Stir until cooked. 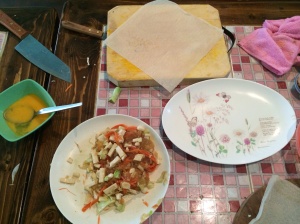 Place 1 spring roll sheet on the counter in front of you. Add ~3 Tbsp of filling mixture near the corner of the sheet. Roll pastry to cover mixture, fold in the sides and roll up completely. 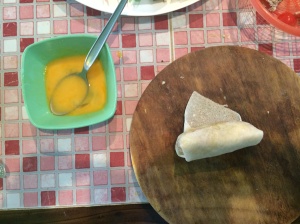 Brush a little egg on the last corner of the spring roll pastry to seal. 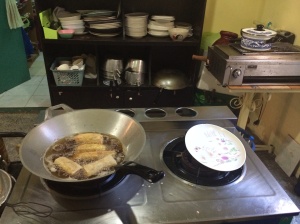 Cook in ~1 litre of oil about ten minutes, until rolls are golden brown on all sides. Remove from oil and let drain and cool a few minutes before serving. 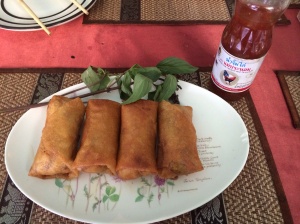 I was curious to taste Chiang Mai sausage, but the truth is that I was never going to buy an actual sausage. I am not the type of person who enjoys or orders (ever) sausages. Considering I did want to try a Chiang Mai sausage, I had a little conundrum. In the end, I found this Chiang Mai sausage pizza in one of the nicer tourist restaurants and it was the perfect compromise.

The entire pizza was delicious and, in my opinion, actually looked much nicer in reality than it did in the photo on the menu. The sausage itself was also really good– a little dry but very herb-y.

Khao soi is a Chiangmai specialty. It’s a mild curry similar to massaman curry with chicken and noodles and fried crispy bits on top. It’s also served with chili flakes, onions, and fermented vegetables on the side which you can add according to your preferences. Below are two different khao soi meals I had, one at an expensive restaurant for tourists and another at a smaller, more local restaurant. 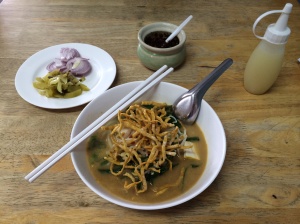 This is a thai street food that I really love. It’s extremely cheap and a pleasant way to fill up without upsetting your tummy. Also, slightly charred, super crispy rice is a guilty pleasure which I relish. 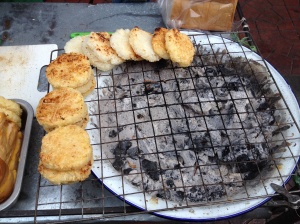 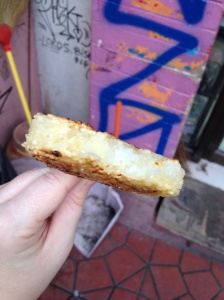 Casa Nithra only had a vacant room for one night, so I had to find a different room for my last three nights in Thailand. On a whim and a hunch, I decided to see if there were any spots available at Peachy. I had had so many intentions of treating myself to fancy hotels during my entire stay in Thailand, but there was just an invisible string drawing me back to Peachy.

You see, when I was down and out, Peachy is where I lived. It’s a tiny bit noisy and it’s full of dirty obnoxious hippies, but for a private room with a shared bathroom it’s 120 baht per night which is roughly 4 USD. To get a sense of just what a good deal that is, you would normally be hard-pressed to find a bed in a dorm for less than 150 baht, and most other private room/shared bathroom deals are about 180 baht and above. Peachy is the cheapest accommodation around, not to mention the best value. I can understand why the dirty obnoxious hippies like it so much. I’d just appreciate if they understood that some non smokers are no smokers because it makes us physically ill. I mean, wouldn’t it match with hippy dippy ideals to take everyone’s interests to heart and just go outside for your smoke?

Anyway, I digress. Unbeknownst to me, when my friends at Peachy knew I was back in Bangkok, they reserved one of the coveted corner rooms for me (the corner rooms are a little darker at night and quite a bit larger than most of the other rooms).

I’m glad I went back to Peachy for those last three nights in Bangkok. I hadn’t realised how much Peachy had become my home, but coming back to Peachy really was like coming home. It’s a place where I’m welcome, where I belong, and that is such a pleasant, calming feeling to have, to know that if nothing else is right in the world for me, I have a place where I can go back to.

Apologies for the short hiatus from the blogosphere. I was having difficulties uploading all the photos I wanted for this next post so I gave up for a few days, and then for quite a few days after that I had a really hard time getting myself back into the blogging swing if things.

Anyway, when I arrived back in Bangkok from Chiangmai, it was about 12:30 am on New Year’s Day. Everyone was in the street and happy and partying. I just needed to find a place to sleep. So. I set out searching for a hotel or guesthouse that had a vacancy. Unsurprisingly, most places were booked solid, but I just kept plugging at ‘er, moving my way through the streets, stopping at every hotel and guesthouse to ask about vacancies, and being turned away at every one. I was fully prepared that I might end up sleeping in a park or pretending that I was also an all-night New Years reveler, and since that was my alternative, there really was no harm in going on such a long walk to find a room. I started at the end of Pra Arthit Road opposite the Riva Surya, and the first place I could find that had a room available was quite a way away on Samsen Road. It was the Casa Nithra, which I almost wrote off completely and bypassed because I figured that there was no way they would have any rooms available and, even if they did, they were unlikely to give a room to someone as dressed down as I was with no luggage. But I was wrong on both counts. They gave me the last room they had available that night. It was 3,000 baht including breakfast or just 2,700 baht without breakfast.

I had been pretty curious about this hotel for a long time, as I used to walk by it on my way to work during my poor days when I was just scraping by in Bangkok. From the outside, it’s a pretty amazing, stylish-looking building. From the inside, well, it’s okay. It was nice but it was also just a normal hotel room. 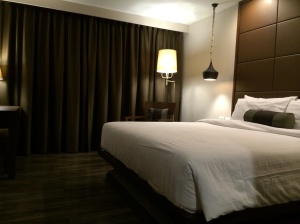 The next morning, I went down to breakfast and discovered that they included BACON as part of their buffet. Let me let you in on a well-known secret about bacon: it is God’s gift to humankind. True story. Let me let you in on another secret about being an expatriate in a strict Muslim country where bacon is strictly prohibited: you do not actually realise how deep your love of bacon runs until you are deprived of it. When you are finally reunited with bacon, well, the following photos can show what happens.

Things I Eat
Create a free website or blog at WordPress.com.